FEMS and the Serbian Society for Microbiology are happy to announce the next FEMS Conference on Microbiology, which will take place from 30 June to 2 July 2022 in Belgrade, Serbia. Be part of this event, where intercontinental, European, regional, and local scientists from all stages in their career and from all demographical backgrounds, can participate in a high-profile conference.

Belgrade has been selected as a vibrant city and a true regional hub for Balkans and Southeast Europe, with first-class travel connections to all European destinations. Belgrade is also home to the Serbian Society for Microbiology, that has a long tradition of successfully organized regional and international microbiology conferences.

Belgrade is situated at the confluence of the Sava and Danube rivers, where the Pannonian Plain meets the Balkans. The medieval town of Singidunum, which is the Slavic name of Belgrade known since 878, was built on the site of today’s Belgrade Fortress and Kalemegdan Park, above the place where the Sava flows into the Danube. Because of this position Belgrade is appositely called the Gate to the Balkans and the Gate to Central Europe. 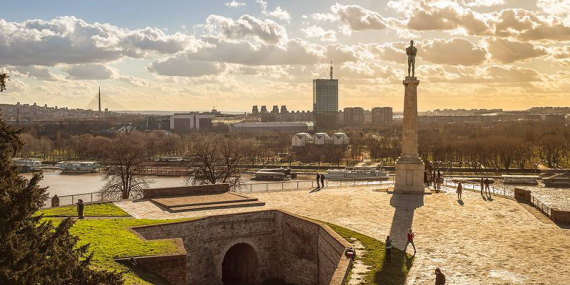 "Whoever had been lucky to wake up in Belgrade this morning, could be satisfied that for today he achieved enough in life. Any further insistence on something more, would be immodest."
- Dusko Radovic, Serbian poet

Belgrade has a moderate continental climate, with four seasons and uniformly spread precipitation.

The official currency of the country is the Serbian Dinar (RSD).
Foreign currencies can be exchanged at Banks, at the Airport or the Exchange Offices.

As in most cities of Continental Europe, the electricity voltage in Belgrade is 220V. Electrical outlets are standard European with two round pins.

Belgrade is one of the oldest cities in Europe. It has a history of 7000 years, and the oldest archeological finds date back to the fifth millennium AD. Between the 16th and 19th centuries, Belgrade was called by many names in different languages:, Alba Bulgarica, Alba Graeca, Bello grado, Nandor Alba, Griechisch Veissenburg and Castelbianco.

The official language is Serbian. The official alphabets are Cyrillic and Latin. Visitors from abroad can use English to communicate.

Belgrade is the capital and the largest city of Serbia. The city has a population of 1.23 million, with the metropolitan area of over 1,7 million.

Belgrade and Serbia are in the CET (Central European Time) zone, same as most of Europe (Excluding Britain, Portugal, Romania and Greece) – UTC+1.

In summer the Daylight Saving Time (DST) moves it to CEST – UTC+2.

Most shops and grocery stores work usually from 8 AM to 9 or 10 PM, but there are others that work 24h. Large shopping malls are open from 10AM until 10 PM for business days and weekends too. Banks and offices have standard 9 AM to 5 PM working hours. Most of them have ATMs (cash machines).

Welcome to Belgrade
Meet the Committees
About the Organizers
Important Deadlines